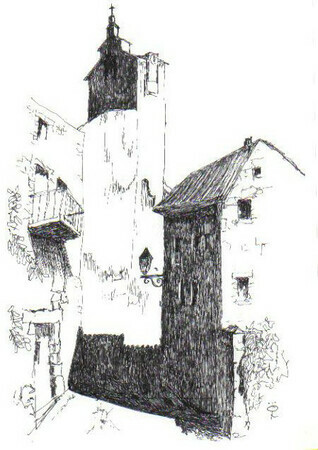 Lennart Osterlind was born in Sweden on the 5th of October 1937. While growing up in South Africa, he attended Art School where he was introduced to various art media and produced many of the puppets for a production of Shakespeare's "A Midsummer Night's Dream."

After returning to Sweden, Lennart attended the prestigious School of Applied Art, "Konstfack skolan" in Stockholm for three years. He served first an apprenticeship in printing and typesetting and then a further two years with a graphic designer in Bern, Switzerland where he also attended "Die Kunstgewerbe Schule" (School of Applied Art )

Lennart worked as a graphic designer for many years in Sweden. He also ran his own Graphic Studio in Beirut and was the art director for Promotec. Promotec represented J. Walter Thompson for the Middle East. In addition Lennart designed many campaigns for Formost Dairies, Trevira, Toshiba, Austrian Airlines, Ethiopian Airlines and Polish Airlines.

Lennart and his wife, Margareta, came to Canada 1968 after the evacuation from the Middle East during the six days war. In Vancouver, Lennart developed and drew the cartoon "Hip and Hop" for the French paper Le Soleil for some years.

For the past thirty years Lennart has worked in the insurance field and enjoys his colleagues' and clients' support. By chance, when Lennart was going through a client's warehouse to assess the insurance risk, he noticed two Oil Painting Kits and asked Paul, the owner, what they might cost. The price was so advantageous that he bought them on the spot. This event returned Lennart to his first love of drawing, designing and painting and he is now a honorary member of the South Delta Artists' Guild.

At present, Lennart gives drawing and painting classes which are attended by young artists. He is very proud of these young students that now are attending art schools.  He exhibits his oil paintings and ink drawings at the Gallery 1710 in Tsawwassen BC. He also has had individual art shows in Vancouver and Delta.
Lennart has produced three books and art shows with students and teachers from local high schools in Tsawwassen and New Westminster.
Copyright © 2021, Lennart Osterlind. All rights reserved. | Administration | Powered by ArtSites.ca